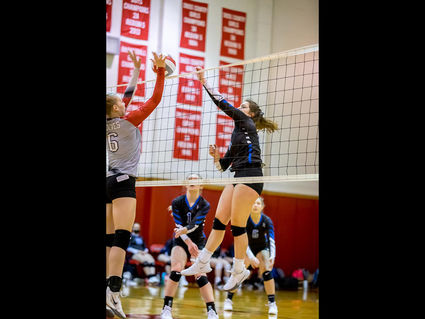 Ines Larson hits the ball over the net to her Wrangell opponent on Saturday.

Nov. 13 saw the kick off of Petersburg's and Wrangell's senior appreciation ceremonies with a home game for the Vikings against the Wolves. Petersburg stayed on top of Wrangell through the game and won the match in three sets. Petersburg won the first set 25-19, the second set 25-21 and the third set 25-12.

"The girls did great over the weekend," said Head Coach Jaime Cabral. "They served tough, which they struggled with the we...