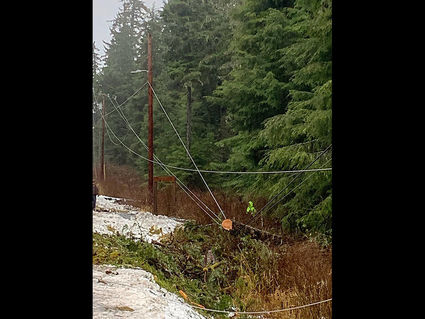 A fallen tree knocked out power lines near 11.5-mile, as pictured here. According to Wrangell Municipal Light & Power, there have been multiple trees knocked out by stormy weather early this week.

WRANGELL - Due to stormy weather Wrangell saw through the night and morning of Monday and Tuesday, according to Wrangell Municipal Light & Power, some trees fell onto power lines out Zimovia Highway and caused some outages on Dec. 1.

A Facebook post from the City and Borough of Wrangell announced that power was lost between 9-mile and 13-mile of the highway. Rod Rhoades, WLM&P director, said that they received reports of two fallen trees out the road, at 11.5-mile and 11.75-mile. Rhoades said he had crews out there working to restore power to the area. No poles were lost from the falle...