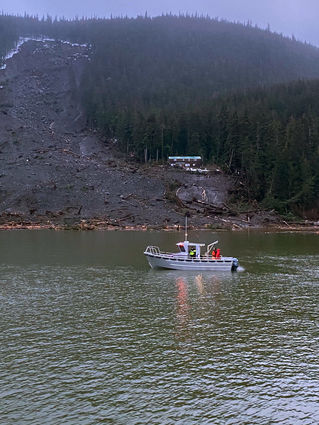 Haines, a community of about 2,500 people experienced several landslides, which followed a deluge of about 10 inches (25.4 centimeters) of rain over two days. The largest slide was estimated at about 600 feet wide (183 meters) and took out four homes while pushing debris to the water line.

HAINES, Alaska (AP) - Officials in southeast Alaska have repeated warnings about possible landslide danger in the community of Haines, where two people remain missing after a large slide last week.

Torrential rain across much of the region caused havoc in many communities, including Ketchikan, where emergency officials announced there was no longer a danger of dam failure.

The community of about 2,500 people experienced several landslides, which followed a deluge of...