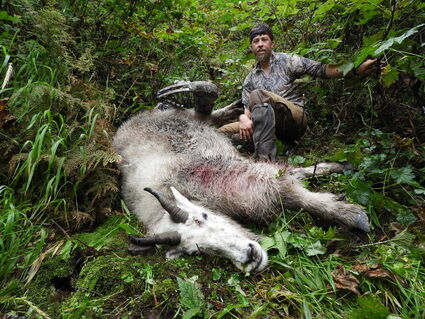 Kaleb Baird poses with the Rocky Mountain billy goat he shot with his bow and arrow in September on the Cleveland Peninsula.

After an anxious three months, the rocky mountain goat Kaleb Baird shot with a bow and arrow on the Cleveland Peninsula has been certified by Pope and Young, a conservation club, as the largest billy ever taken down with a bow in the world.

"It was a killer animal and a great goat," said Baird. "It's neat that he gets to be recognized as number one."

The mountain goat had a final score of 53 1/2 inches, according to Pope and Young. Baird said an official scorer took ten different measurements of the animal's horns and added them up. A Pope and Young panel reviewed the measures and also mad...