Pilot picks up where others left off 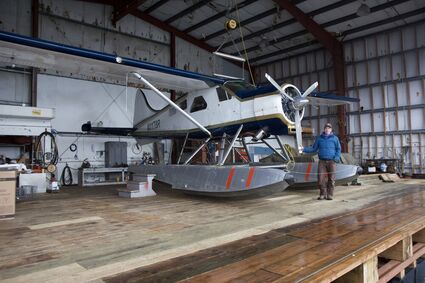 Scott Newman next to the DeHavilland Beaver he purchased to start up Petersburg Flying Service, LLC.

Scott Newman had always wanted to fly float planes out of Petersburg. He had flown planes for both Pacific Wing and Pacific Wings on and off since the early 1990s. When COVID-19 shut down the latter air taxi service earlier this year, the DeHavilland Beaver went up for sale.

"I really liked flying the Beaver," said Newman, who was born and raised in Petersburg. "It was kind of like my airplane of choice. When I flew for them, I tried to fly it as much as possible."

He purchased the Beaver and its hangar at the seaplane float and founded Petersburg Flying Service, LLC. He hasn't had much bu...