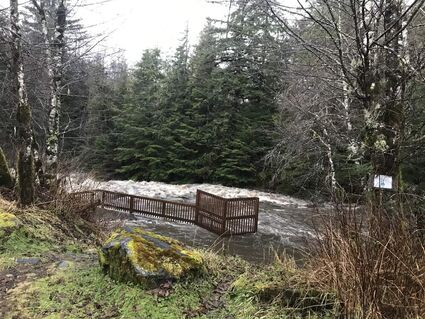 Water overflows Falls Creek after a record amount of rain fell over Petersburg in early December.

Last year it may have seemed like a record breaking amount of rain fell on the city. After all, Petersburg had the wettest summer on record, and heavy showers in December caused parts of the borough to flood. According to Meteorologist Caleb Cravens with the Juneau Weather Service, the total amount of rainfall in 2020 was just about normal.

"Overall, it may seem like it was a wet year, but it was just those summer months that were above normal that made everyone thinks it was super wet," said Cravens.

The normal annual amount of rainfall for Petersburg is 109.23 inches, according to Craven...