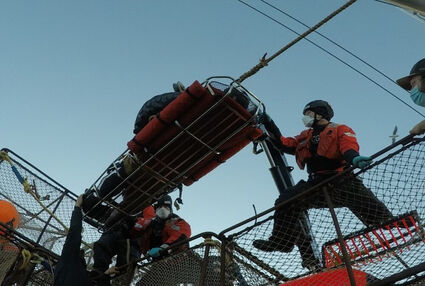 Photo courtesy of the USCG

Coast Guard Cutter Alex Haley crew members prepare an injured fisherman aboard the F/V Magnus Martens for a helicopter medevac on Dec. 30. A health services technician from the USCGC Alex Haley and other team members administered first aid and transported him to a safer place on the boat prior to the helicopter arriving.

The United States Coast Guard medevaced an injured fisherman on board the F/V Magnus Martens 80 miles Northwest of Dutch Harbor in the Bering Sea on Dec. 30, according to a USCG press release.

An MH-65 Dolphin helicopter crew based out of Air Station Kodiak was deployed on board the Coast Guard Cutter Alex Haley. The fisherman was initially flown to Dutch Harbor for medical care, but it was determined that he was in need of a higher level of care, according to the press release. He was then taken to Cold Bay by the USCG where the fisherman was placed into the care of Guardian Flight Alaska...