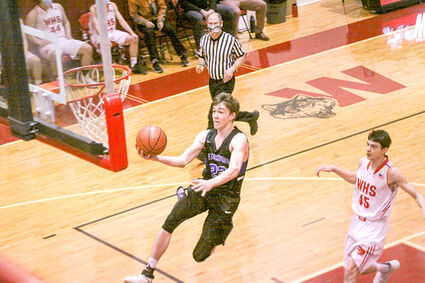 Michael Durkin jumps to perform a layup at the Jan. 29 game between the Vikings and the Wolves.

The Petersburg High School boys basketball team traveled to Wrangell on Jan. 29 to play the Wolves for their homecoming weekend in the first two games of the season, and came back with one win and one loss.

The first game was held Friday evening and was filled with excitement as the Vikings were back on the court to play an opposing team for the first time since early March 2020. Head Coach Rick Brock said both teams fought hard, but the Vikings made quite a bit of mistakes and missed makeable shots. That's normal for the first game of the season, but Brock said the late start of the seaso...