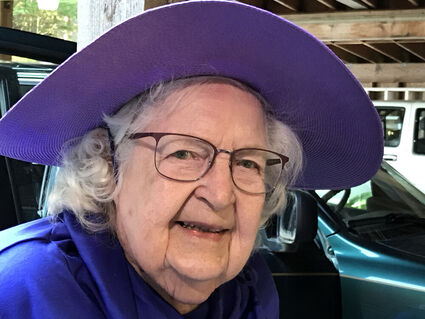 Angelette "Angie" Hofstad passed away in the loving care of her family while living out-of-state due to the pandemic. She was 95 years old. She was the firstborn to Leon and Sie Hasbrouck. Like both of her siblings, Angie was escorted into this world by her maternal Grandmother, who was a Midwife and a descendant of the Nisqually Tribe. Angie and her siblings were raised and homeschooled on their fox farm at Camp Island, in the mouth of Le Conte Bay. Her time spent at Camp Island were some of her favorite memories to share. She spoke of the harsh realities of being a young child during the Great Depression, and the hard work necessary to carve out a subsistence life in this rugged land. Her fond remembrance of her family, the people she encountered growing up, the gardens, animals, and land was a testament to her resilience. She would go on to maintain a lifelong love of hunting, fishing, gathering, and gardening. Angie was also a life-long learner who loved to read about wildlife, plants, health, and natural healing. Later in life, she became a passionate advocate and supporter of nature conservation locally and globally. All her life Angie lived by a code of honor and duty to uplift those less fortunate and supported organizations for the poor, homeless, and Military Veterans with her time and money. A smart woman with strong convictions, she will be remembered for her generous heart, pragmatic nature, and knowing the proper names for all the plants and birds.

Her family moved from Camp Island to Petersburg in 1942 where Angie graduated from Petersburg High School in 1943. She then went to Business school in Olympia, WA. From there she joined the war effort working as a civilian for the Army first in Anchorage at Fort Richardson and then in Georgia at Fort Benning.

After the war, Angie met Oliver Hofstad on a steamship headed back to Petersburg. They were married in 1946 and enjoyed a duck hunting honeymoon at Point Agassiz. Oliver and Angie were the best of friends and enjoyed a long life together. They raised 5 children while building a commercial fishing business; which included the building of two boats by the name F/V Angelette. Angie's loved ones will forever remember her large family dinners, with every aunt, uncle, and cousin available in attendance. The stockings she knit for each person in her ever-expanding family, every Christmas through her last; when her family had grown to include 12 grandkids, 20 great-grandkids, and 1 great-great-grandchild. Aunt Angie will be remembered for the special place in her heart and home she held for each of her 28 nieces and nephews. She will be remembered for her kind-hearted shelter in life's storms.

Angie liked to tell the story of when she was a young hunter her father dispensed to them only one bullet, as bullets were not cheap. When she was 15 years old she wrote about a family moose hunting trip up the Stikine River and states, "[Her] heart's desire is her Dad's .303 rifle." Many years later while deer hunting with Oliver they were charged by a bear. When Oliver froze Angie shot that bear. This is a story her family proudly tells. She enjoyed deer hunting trips to Camp David well into her eighties. She also enjoyed trips to the hairdresser, fabulous lipstick, and nature-themed jewelry till the very end.

Angie was an active community member, volunteering her time to teach Sunday School, lead Boy Scouts, maintain the grounds at the Clausen Museum, and was a founding member of the Petersburg Public Library. She was a member of several volunteer organizations such as the Hospital Guild, Emblem Club, Sons of Norway, and the Lutheran Church's Ruth's Circle. She continued volunteering her time to the Hospital Guild and Ruth's Circle well into her 90's.

Angie was preceded in death by her son Andrew Hofstad, her parents, her sister Leona Nelson, brother Theodore Hasbrouck, and her beloved husband Oliver Hofstad. She is survived by her four daughters Anna (David) Holmes, Olivia Olsen (Thomas Drennan), Ella (William) Hisaw, Susan (William) Hofstad Lewis, and a bountiful amount of nieces, nephews, grandchildren, and great-grandchildren. A memorial will be held at a later date when it is safe to gather and the gardens are in full bloom.