Petersburg to stay in red for another week 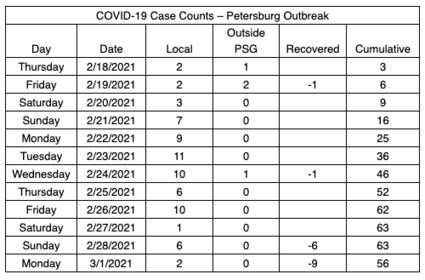 The Emergency Operations Center is maintaining Petersburg's high risk level for COVID-19 transmission for at least another seven days, as positive cases of the virus continue to be identified and residents begin to recover.

The EOC will assess the status of the recent COVID-19 outbreak on March 8 to determine whether or not to extend the community's red status, according to a joint press release from the Petersburg Borough and Petersburg Medical Center. Two more cases were confirmed on Monday, but nine infected individuals were deemed recovered. Petersburg's active case count for COVID-19 is 56 as of 4 P.M. on Monday, according to the press release.

Petersburg's current case count marks the first decline in cumulative active cases since the local outbreak began on Feb. 18. The active case count increased each day for 10 days straight before reaching and maintaining a peak of 63 active cases on Saturday and Sunday.

One case was identified in town on Saturday and another six cases were confirmed on Sunday; however, six infected residents were reported as recovered on Sunday. Since the start of the local outbreak, Petersburg has reported 73 cases of COVID-19.