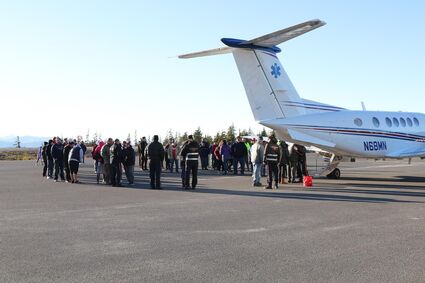 February 2019, about 100 people welcomed the first Guardian Flight plane to return to Kake after one of their aircrafts went missing. Kake residents greeted the aircraft and those on board with a performance of their national anthem in Tlingit.

An aviation accident report on the Guardian King Air 200 medical life flight that lost control en route to pick up a patient in Kake in January 2019 could not definitively identify the cause of the accident due to limited information available.

The report was conducted by the National Transportation Safety Board. Investigators were unable to recover the entire wreckage, and the Cockpit Voice Recorder did not contain recordings from the flight, according to the report. Investigators also couldn't recover non-volatile memory from the aircraft, nor could they conduct an autopsy or toxicology...