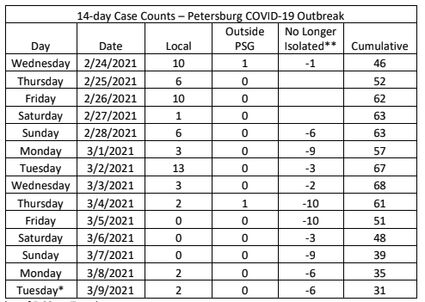 The chart above lists the current outbreak's cumulative COVID-19 case count as of 5 P.M. on Tuesday.

Two cases of COVID-19 have been added to Petersburg's COVID-19 active case count on Tuesday, but six residents have been released from isolation, according to a joint press release from the Petersburg Borough and the Petersburg Medical Center.

As of Tuesday evening, Petersburg's COVID-19 case count was at 31 cases. Tuesday is the sixth day in a row that the local active case count has seen a steady decline. Since the start of the local outbreak, the cumulative case count had been increasing until it reached a peak of 68 cases on March 3.

The Emergency Operations Center is asking anyone who has come in contact with an infected resident to call 772-5788 for medical guidance. Anyone who is recovering from the virus is also encouraged to answer phone calls from public health officials. They may have information regarding the infected individual's isolation status.