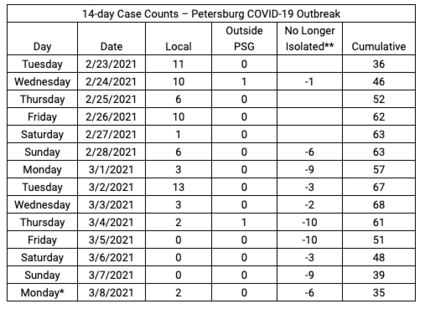 Two cases of COVID-19 were confirmed in the community on Monday, after three consecutive days of no new cases, according to a joint press release from the Petersburg Borough and Petersburg Medical Center.

As of Monday afternoon, Petersburg has 35 active cases of COVID-19. Two cases were confirmed on Monday, and six infected residents were released from isolation. Monday's two positive cases were the first identified in the community since Thursday. The Emergency Operations Center reported zero new cases on Friday, Saturday and Sunday. In that same timeframe, 22 infected residents were removed from isolation.

"We're not completely out of the woods by any means, but the numbers do seem to be heading in the right direction and getting us out of this outbreak," said Incident Commander Karl Hagerman at Monday's assembly meeting.

Hagerman said the EOC did meet Monday morning to talk about whether or not to lower the community's risk level for COVID-19. Because of the high number of active cases in the community, Petersburg's risk level will remain at high, or red, for at least another week.