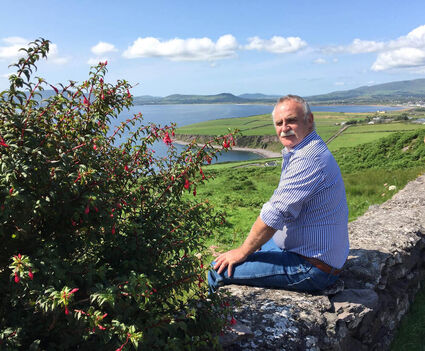 Jim was born on July 2, 1957 to parents, Christopher and Vera, in Nenagh, County Tipperary, Ireland. One of nine siblings, Jim was described as an adventurous and mischievous, albeit mellow, child. He attended Cistercian College Roscrea private boarding school in County Tipperary and Mountbellew Agricultural College in County Galway. When he left college, he tried his hand at a number of things, finally settling on working machinery with his older brother, Christopher, which he loved. At the age of 25, Jim set off to America, heading first to New York City to stay with his sister Joan and her husband John. His sister, Fiona was also in NYC at that time, and soon after, his brother Desmond, his sister Jacqueline, his sister Deirdre, and her husband Liam joined them. After a year bartending at John's restaurant in NYC, he moved on to San Francisco, and eventually made his way to Alaska to pursue his passion of working construction. Jim fell in love with the rugged wilderness of Alaska and never looked back. In 1988 he met the love of his life, Tina, while working in Petersburg, Alaska and started a family of his own. His work in construction brought the family to a number of places throughout southeast Alaska, including Petersburg, Juneau, and Haines, but eventually they settled in Sitka, Alaska, where Jim built his dream cabin on Kasiana Island for him and Tina to call home. He treasured his life in Alaska, but never lost his love for his home of Ireland. He was proud to be an Irishman and often said one of his happiest moments was bringing his wife and children to Nenagh to share the places and memories from his childhood with them.

Jim was known for his quick wit, his infectious smile, his indefatigable work ethic, his kind and compassionate spirit, and of course, his lively Irish brogue. He loved his family, his dogs, the great outdoors, and the simple pleasures of hunting and fishing. He was well known and respected within the construction industry and even had the opportunity to start a company of his own with his son, Jimmy. Jim and Tina lived a simple, happy life and were so blessed to find a love like they shared. Jim was a loving and devoted husband, an amazing father, an inspiration and mentor to many, and a friend to all.

Due to COVID, the family will hold a small private ceremony at 2:00pm on Friday, March 5, 2021 at St. Gregory's Catholic Church in Sitka, Alaska. A larger celebration of life will be held in late spring or early summer in Petersburg, where he will be laid to rest.