SEAPA could raise rates to pay for submarine cable 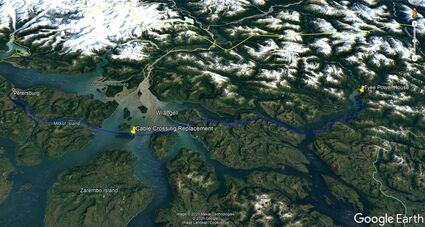 The map above shows the location of the faulty submarine cable and its place in the overall Tyee hydroelectric power grid.

Southeast Alaska Power Agency will likely have to raise rates to pay off bonding for the replacement of a damaged submarine cable, said SEAPA board voting member Bob Lynn at a Borough Assembly meeting Monday.

At a recent SEAPA board meeting, board members discussed bonding as a way to pay for the approximately $14 million replacement submarine cable. SEAPA has to pay Sumitomo, a Japanese firm, for the cable at one time, but $14 million is nearly all SEAPA has in financial assets, said Lynn. The SEAPA board is looking at the Alaska Bond Bank for bonding, but a decision hasn't been made yet....