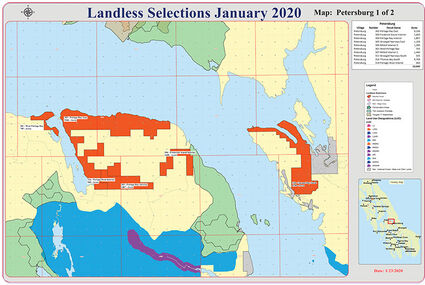 The plots in red show federal land within the Petersburg Borough around Portage Bay and Thomas Bay that would transfer over to a local Urban Corporation. The maps and supporting documents can be viewed on the borough's website under the "Alaska Natives Without Land" tab.

Six people addressed the Borough Assembly at a work session on March 10 to express their support and opposition to legislation that would transfer 23,040 acres of federal land within the Petersburg Borough to an Urban Corporation.

The intention of the work session was to give the public an opportunity to share their opinions with the Borough Assembly on the Unrecognized Southeast Alaska Native Communities Recognition and Compensation Act before the bill is reintroduced to the 117th United States Congress sometime this year by Sen. Lisa Murkowski. Four of the six individuals spoke in favor...