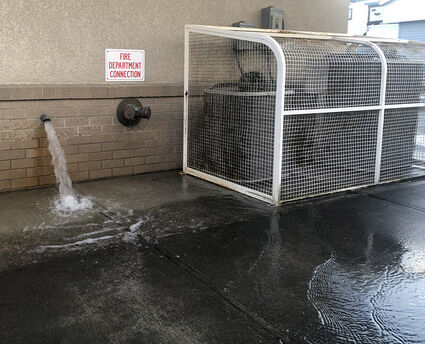 Water gushes out of a drain on the side of First Bank on March 19 while a bell rings loudly after a failure in the building's fire suppression system caused water to follow through the system. Petersburg Volunteer Fire Department Assistant Fire Chief Dave Berg said had there been a fire, the heat from the flames would have melted a valve in the overhead fire suppression system, or sprinkler system. An air compressor would have then pushed water into the system and out the sprinkler head with the melted valve to extinguish the flames. Because water was pumped into the sprinkler system when there wasn't a fire, and an exit for the water in a sprinkler head was present, water was forced out of the drain, and onto the street.