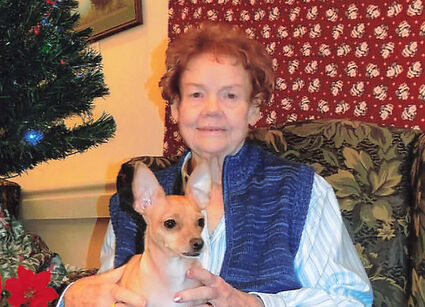 Pat passed peacefully at home in Petersburg, Alaska on March 18, 2021. She was the youngest of six siblings born to Ben and Myrtle Reid in West Palm Beach, Florida on January 23, 1938. She graduated Lake Worth College, Florida with a degree in early childhood education.

In 1977 Pat met and married the love of her life, Robert "Bob" Hinde, in Ventura, California. Wanting an adventure, they traveled north up the Pacific coast until Bob took a job with the ADF&G as an engineer on the M/V Polaris which was home ported in Petersburg. They fell in love with Petersburg and the people. Pat joined Mike Dean at "The Office" then later bought the business from him. For many years Pat enjoyed providing bookkeeping and DMV services for the community until her retirement.

Pat was passionate about early childhood development. With her help Tlingit and Haida established the Head Start Program in Petersburg. She was also involved in the early stages of the Petersburg Children's Center; serving on the board and teaching children.

Pat considered herself a Sassy Southern Lady. She loved music, dogs and the color purple. She volunteered her time generously and some of her favorite contributions were with the Petersburg Humane Association (she had to stop fostering dogs as she ended up adopting each dog she fostered), the Petersburg Lutheran Church and KFSK Radio Station. Her weekly country music show "High Country" aired every Wednesday afternoon. Her opening song by the Texas Tornados' "A Little Bit is Better than Nada" was one of her favorites. Pat enjoyed sharing music with the community on the KFSK airwaves for almost 40 years.

A graveside service for Pat Hinde was held March 23 at the Petersburg Memorial Cemetery. In lieu of flowers the family suggests memorials may be made to the Humane Association or KFSK.