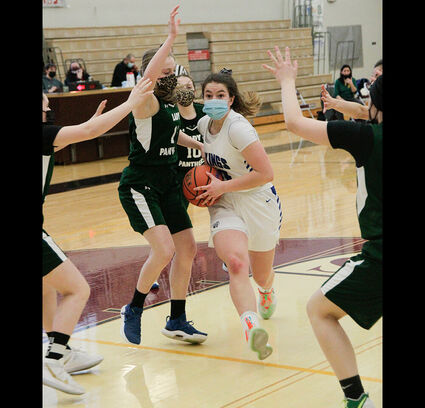 Ines Larson drives the ball as the Lady Panthers attempt to block her.

The Lady Vikings took first place in the Region V 2A Division Regional Tournament in Ketchikan on March 27 with a team of only five players.

The Petersburg High School girls basketball team went into the tournament with the number one seeding. After winning a match against Metlakatla, Craig played in the championship game against Petersburg.

The Lady Vikings started off their game against the Lady Panthers with a burst of adrenaline, said Head Coach Dino Brock. They went into the second quarter ahead, 15-6, but at half time, the Lady Panthers were only down by three points. Petersburg was...