Groundskeeper retires after 24 years with city 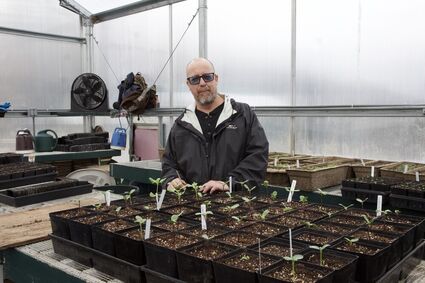 Jesse O'Connor stands with a tray of sunflowers that he has been growing in a greenhouse at the Petersburg Cemetery for the past few weeks. The sunflowers will eventually be planted throughout the borough to be enjoyed by the community. O'Connor said he was the one who first introduced the flowers to Petersburg. Before he arrived in town, no one was growing them. Now the flowers can be seen in gardens across the borough.

The lawns and flower beds around town have been immaculately kept for the last two decades thanks to the Petersburg Borough's groundskeeper, but, at the end of the month, Jesse O'Connor will be retiring.

He first joined the City of Petersburg in 1996 as an assistant groundskeeper. Several months later he transferred over to the city's bailer facility where he worked until 2000 when he became the head groundskeeper for the city.

"Once I started doing the gardening, I didn't want to do anything else," said 61-year-old O'Connor.

Prior to moving to Petersburg, O'Connor had lived in Alaska sinc...