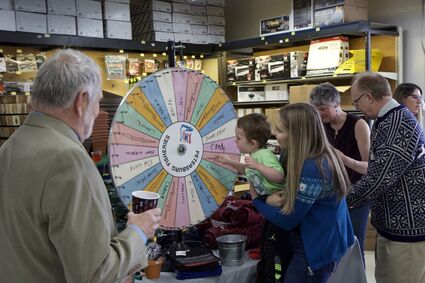 Sarissa Miller holds Odin Burrell as he spins the prize wheel at the Hammer & Wikan Hardware Store on April 17.

Hammer & Wikan, Inc. kicked off a year's worth of celebrations on April 17 with their Founder's Day event to commentate the business's 100-year anniversary.

The festivities began at the grocery store. Every person who entered the building was given a balloon, which could be redeemed for a gift. Guests were also given cake and coffee in a commemorative mug. They were also given the opportunity to enter a raffle to win a new barbecue.

Later in the afternoon, the party continued at the hardware store. Instead of a balloon, each person that attended the event got to spin a giant wheel to w...