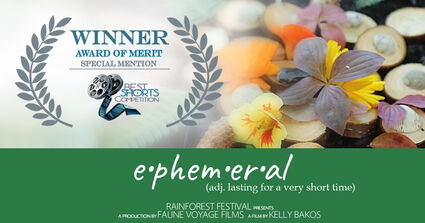 "Ephemeral," an award winning documentary by local filmmaker Kelly Bakos, will be making its television debut on KTOO 360TV over a four day period next week.

Bakos' film, "Ephemeral," documents the creation and lifespan of natural art pieces that were created for October's Rainforest Festival. The art pieces were constructed o...