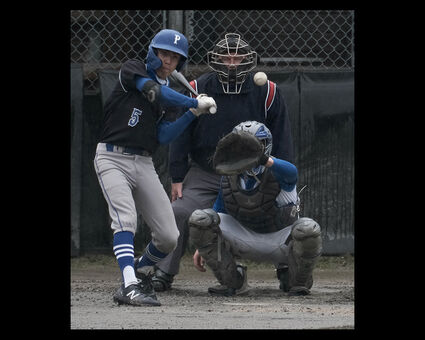 Kieran Cabral keeps his eye on the ball as he prepares to swing during the Vikings' series of baseball games against Thunder Mountain.

The Petersburg High School baseball team ended their season with three losses against Thunder Mountain High School, but now they look to State, as they hope to qualify for the at-large berth.

PHS is the only Division II school in Southeast Alaska with a baseball team, so the Vikings will not be competing in a regional tournament, said Head Coach Jim Engell. Because the Alaska School Activities Association has created a small schools division for the state tournament this year, the Vikings do have a chance of competing at State. Engell said PHS could be selected to play in an at-large berth...