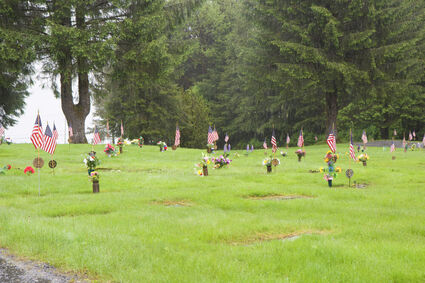 Veterans and other volunteers placed about 224 American flags on the graves of local veterans on May 26 to be on display for a week in observance of Memorial Day. Veterans that have been laid to rest in Petersburg include veterans from the Spanish/American war, both world wars, the Korean War, the Vietnam War and the war in Iraq.

About 50 people gathered together at the Petersburg Cemetery on Monday for the annual Memorial Day ceremony to honor the approximately 224 local veterans who have been laid to rest in the cemetery, according to local veteran Paul Anderson.

The proceedings began with an opening prayer and was followed by a rendition of "America the Beautiful" lead by Pastor Nathan Lopez. He also led the crowd in singing "America (My Country, 'Tis of Thee)" at the end of the ceremony. Members of the Petersburg Ministerial Association, which organized the event, read from the Book of Psalms and Ephesians, rec...