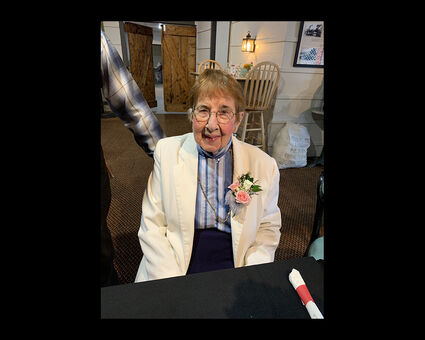 Rose Axtman was born at home on the family farm near Balta, North Dakota to Frank Axtman and Magdalena Bohl on August 17, 1924. She was the seventh child in a family of eight. Grade school was a one room country school. She graduated from Balta High School.

She went on to nurse's training at Mercy Hospital at Williston, North Dakota but left after one year and returned home. She worked at several jobs and eventually the grocery store where she met Ed Volk, her future husband. They were married on November 25, 1947 and together they had twelve children.

Besides raising her large family she worked in hospitals for thirteen years. In 1985, Rose and Ed came up to Petersburg to visit three of their sons who were working here. After several more visits they moved here in 1990. Ed was diagnosed with cancer and they went back to Fargo where Ed received treatments. Ed died in 1992.

Rose then came back to Petersburg and lived in Mountain View Manor for thirteen years. Rose and Mike Durbin got together and they were married on June 25, 2004.

Rose was preceded in death by her mother, father; sons, Cyril, Walter and Kevin; grandson Jeremy Brekken and six brothers and sisters.

Services will be held at St. Catherine's Catholic Church on Thursday, June 17 at 2 p.m.

In lieu of flowers, donations may be made to your favorite charity.