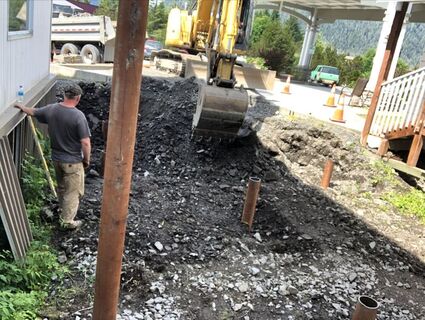 Ty Cummins watches on as Reid Brothers Construction breaks ground on the Mountain View Manor Deck Out Our Deck Project.

Deck Out Our Deck organizers broke ground on the site of Mountain View Manor's covered deck on Tuesday after two years of planning with help from general contractor Ty Cummins and Reid Brothers Construction.

"This has been a long project," said Sally Dwyer, one of the organizers.

The group has only raised $78,000 of their goal of $112,000 needed to complete the project. However, with the funds they have now, the group can lay the foundation for the deck, install support beams and build the platform, said Dwyer. Once the platform is completed and hand rails are installed, residents at MVM...