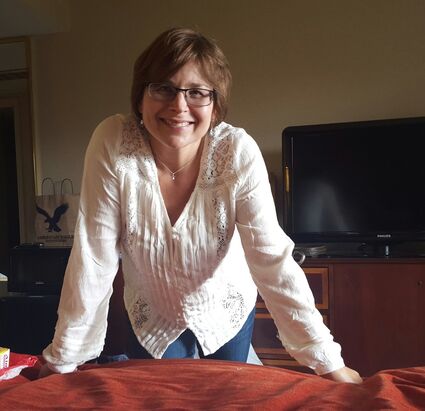 Heidi Marie Bieber, 56, of Juneau, Alaska, passed away June 28, 2021, at Bartlett Regional Hospital in Juneau after a five year battle with stage four ovarian cancer. She was surrounded by her children and wife, parents and brother, listening to their voices, laughs, singing, music, and readings of letters from loved ones.

She was born September 12, 1964, in Forsyth, Montana, to Ingrid and Robert Mogen. Born into a German-American family, she grew up with a hard-work mentality, and a kind and caring disposition. After graduating from Forsyth High School in Forsyth in 1982, she attended Montana State University, where she graduated with a bachelor's degree in Special Education. Her calling was teaching, and she became a friend and advocate for all of her students throughout her career. In the summer of 1990, she married Donald Bieber in Billings, Montana. She went on to raise three daughters throughout several towns in Alaska, including Barrow, King Cove, and Petersburg. Her spirit was adventurous and always up for challenges. While Don and Heidi divorced in 2008, they continued to reside in Petersburg near their daughters.

Seven years later, Heidi met Rita Weigart, from Valentine, Texas, and they married in the summer of 2015. Rita and her daughter Abbey moved to Petersburg, where they eventually bought a house at Papke's Landing. Fishing, hiking, camping, and barbecuing filled their spare time.

In December of 2016, she was diagnosed with cancer. Three grueling years of chemotherapy followed, but she remained hopeful and positive throughout her treatment. Doctors were baffled at how she continually beat the odds for her prognosis. Despite the promising outlook, Heidi and Rita decided to move to Juneau, in June of 2019, for better access to health care. Her health began to decline in the spring of 2021 when she developed resistance to yet another chemotherapy, and she was unable to recover.

Her hobbies included cycling, spending time in nature, and singing and playing the guitar. Just a few months prior to her passing, Heidi began a degree in metaphysics where she'd planned to become a spiritual counselor and reiki healer. While she may not have finished the degree, her lifetime was a testament to the counselor and healer that she naturally was.

She is preceded in death by her grandmother Elisabeth Schmidl and her great aunt Mabel Bowman.

A celebration of life will be held July 11 at 3:00 pm, at the Holy Cross Hall in Petersburg. Those who cannot attend will be able to view the service live via the Petersburg Lutheran Church 2018+ Facebook page.

She wished for any memorials to go to charity organizations that assist those in need.