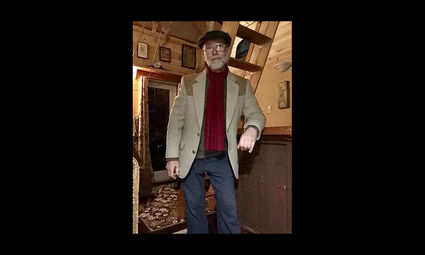 James Michael Demko Jr., 68, passed away on July 4, 2021 after a short battle with pancreatic cancer surrounded by devoted, loving friends in a tiny home he built in Concrete, Washington.

He had a full, adventurous life even before he came to live in Petersburg in August 1990, and he continued that adventure in Bellingham and the Skagit River Valley until his death.

He was the oldest of four siblings born to James Sr. and Colleen Demko, in Bremerton, Washington and attended school and college before joining the Air Force. He was stationed in Upper Hafford, England where he made a life with his first wife Jean Taylor and her two sons, John and Malcolm. They moved to Virginia while Jim continued in the Air Force as an airplane mechanic. After he moved back to Bremerton and began working as a civilian in computer technology, he changed course, realizing his deep desire to work to protect the environment.

He met and married Kelly O'Connor in the Puget Sound area. Living on their first sailboat "Ark," they worked as cook/crew aboard the 100 year old ketch "Sylvia" doing Sea, Sail, Science camps in the San Juan Islands. He and his dad then sailed Ark to Petersburg where Kelly was employed as a teacher. Jim worked as a mechanic, handyman, tourboat guide, and bike shop owner. At the age of 50 he became a father to Liam and attended play-groups with all the young parents through Liam's early years.

He was committed to Petersburg and Southeast Alaska, volunteering with the Petersburg Youth Program, the city planning and zoning commission, the Narrows Conservation Coalition, and the Southeast Alaska Conservation Council. He read constantly and made deep studies of boats, nature and the environment, social and political history, psychology, and evolutionary biology. He was a devoted steward of the land and fierce about educating others to care for the earth and its inhabitants.

An accomplished musician from an early age, Jim loved playing his guitar everyday and could play any instrument he picked up. He loved making music with groups of friends and volunteered to play at Petersburg Medical Center's Long Term Care.

Throughout his life Jim acquired many licenses: airplane, marine, and bicycle mechanic as well as 100 ton captain's license. He could fix anything, collecting and restoring many boats and cars in his lifetime and developing many friendships by volunteering his repair services. He was a natural born sailor and he and Kelly spent their free time exploring the beautiful southeast island waterways.