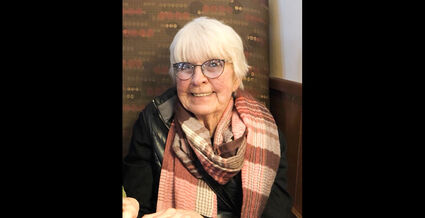 Rose Ormbrek Menish, 93 passed away on March 20, 2021 surrounded by family at her son Bill's house.

She was born on August 18, 1927 in Centralia, Washington and was the youngest of 10 kids. She grew up in Centralia, went to grade and high school there and attended one year at Centralia Community College.

Rose was a person that believed in staying busy. While living in Neilton, Washington you could find her digging for razor clams, working in her garden, picking blackberries, and sewing clothing and costumes for her two kids. She was a girl scout and boy scout troop leader and spent many days camping and fishing at La Push, Washington with her family.

When the move to Alaska happened in 1959 she took up new activities to keep her busy. She became an expert knitter and made many Cowechan sweaters for the family and also custom orders. She took up bowling and was part of more than one team championship. She was a homemaker while her kids were in school but did like to earn some extra money. She spent a few herring seasons harvesting roe on branches in the Craig, Alaska area and working at PFI in Petersburg helping process salmon. She also sewed and did alterations for many people.

After her kids graduated from high school she and Bill, her husband, moved out to live in remote logging camps. Some of the camps were at Nakquasina, Point Berry, El Capitan, Port Alice and Turn Point. Bill became the Camp Manager and Rose was the Office Manager for El Capitan Logging. Among her many duties were to meet the planes, be in charge of the mail, bookkeeper and keeping everyone happy. During this time she taught herself to oil paint and started writing poems. Some of the poems were published in The Loggers World magazine, and many family members received poems for birthday cards.

While working on Heceta Island, an archaeological site was named in her honor: Rosie's Rock Shelter. When the couple retired and moved to Vashon Island, they joined the Vashon Country Club and took up golf. She also taught herself to watercolor, took tap dancing lessons, and ceramic classes; if a class was offered that sounded fun Rose took it. She bought an organ and taught herself to play. She had many fun music sessions with her grandkids.

It was in the last five years that she realized she was part of Rosie the Riveters. She worked in the Boeing Plant in Centralia at the end of WWII. She would say "I was Rosie the Riveter and didn't even know it."

Memorials can go to your favorite charity.