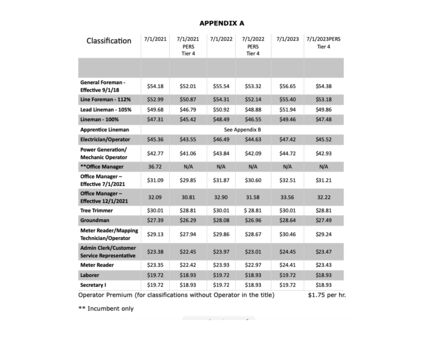 Wage table from the Collective Bargaining Agreement between Petersburg Borough and IBEW for 2021-2024.

The Petersburg Borough's collective bargaining agreement with the International Brotherhood of Electrical Workers had its signature pages distributed Tuesday after the agreement was finalized.

The CBA was approved by the assembly during its July 19 meeting and lasts from July 1, 2021, to June 30, 2024. Changes were made to the wage rates for most positions which will see increases become effective on an annual basis.

According to the agreement, effective July 1, 2021, Journeymen Line...