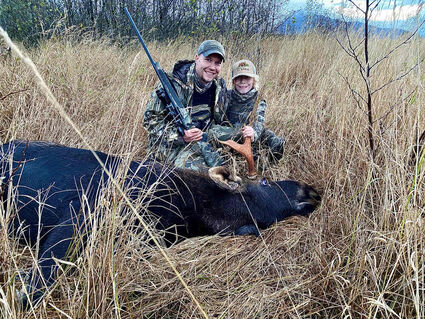 Troy and Noah Larson pose with a moose Sunday evening near Petersburg. Robert Larson joined them, bringing three generations together on the hunt.

The moose harvest is in full swing this year with a count of 81 reported moose as of Tuesday according to Hilary Wood of the Alaska Department of Fish and Game.

During Hunt RM038, Unit 3, which is mainly comprised of Mitkof Island and Kupreanof Island, has seen the most activity.

35 legal moose have been taken so far on Kupreanof Island. Of that, 20 were taken in the area near Kake. With less than ten days to go in the season, 17 more would be needed to reach last year's final tally of 55.

Kuiu Island ranks second on the list with 19 legal moose. That has already surpassed 2019's number of...