An eagle collected for a bounty 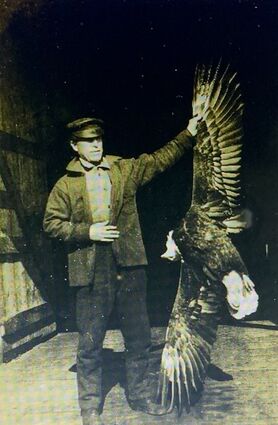 This photo shows Greg Hildebrand holding an eagle collected for a bounty. Though Tlingit culture has always had a close connection to eagles, fishermen at the turn of the 1900s felt they were competing for salmon, causing a decline in harvest. Eagles were also apparently predators of the foxes on fox farms established in Southeast Alaska. The Territorial Legislature instituted an eagle bounty in 1917 that lasted until 1953, ranging from 50 cents to $2 per pair of talons. Eventually the bounty was removed. When Alaska became a state, eagles officially were protected under the Federal Bald E...