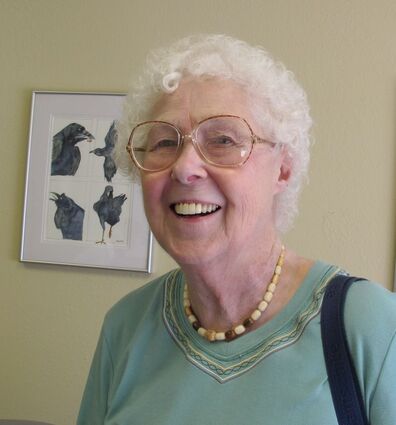 Arlayne was born in Seattle, Washington. When she was 13, her family moved to Walla Walla, Washington. There, she played in the high school symphony and marching band, and was active in the Baptist church. She worked her way through college as a nanny, bank teller and farm worker. At Western Washington University in Bellingham, Washington she had three majors: education, social studies and music.

Growing up, she had heard many stories of Alaska because her parents had worked in a cannery there, and a great uncle had rushed for gold in Nome. Her first teaching job was in Petersburg, Alaska, at age 23 before she graduated from college. In 1953, Alaska was still a territory, and you could teach with just three years of college and no degree.

In 2013, she attended a celebration in Petersburg where she was specially honored where she met a former student who'd been in her first grade class. She thanked her for teaching her to read and had just retired as the town librarian.

In Petersburg, she met and married Dave Klein, a wildlife biologist, and they had their first two children, Martin and PeggyEllen. From Petersburg the family moved to Vancouver, B.C., and then Juneau for Dave's career. In 1962 they arrived in Fairbanks where Laura, their third child, was born.

In 1985, she married the love of her life, Josiah Knox, and gained two more children, Jo Jr. and Ken Knox and retired so that she and Joe could travel together.

There will be a celebration of her life at 2 p.m. Nov. 13 at University Community Presbyterian Church, 3510 College Road, Fairbanks, Alaska 99709.

In lieu of flowers, please consider a donation in Arlayne's name to the University Community Presbyterian Church's Joshua Program or the cause of your choice.