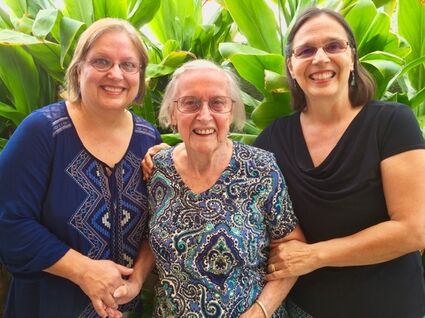 Daughters, Linda Kephart and Debbie Barklow, with Florence in the middle.

On May 15, 2021, our mom, Florence May LeRoy peacefully passed away at the age of 101 years, on the island of Kauai, where she had been living the past 10 years.

Her family that misses her support, love, and fresh baked bread includes us, Linda and Debbie, along with our husbands, Jim Kephart and John Barklow. Her grandchildren, Derek and Jennifer Thynes, Troy Thynes and Megan O'Neil, Kristoffer and Trisha Thynes, Kevin Thynes, Carina Squire, Talya and Gilbert Miranda, and Melissa and Anthony Wolf. And her great-grandchildren, Ethan and Averie Wolf, Mason, Jayden, and Isabella Thynes, Maya Thynes, Leila Squire, Tobiah Miranda, and Danielle Thynes. She is also missed by many nieces, nephews, and their children, whom she kept in touch with and loved.

Our dad, Paul LeRoy, her parents, Roy and Harriet Bell, and all 5 of her younger sisters and brothers, Dorothy, Margaret, James, John, and Mary preceded her in death.

Mom was born in Michigan in 1920 and was raised in Saskatchewan, Canada. She attended nursing school there and then worked in Vancouver, BC as a nurse during WWII. She met Dad during this time and they were married in 1947. They began their Alaska adventure in Craig, then on to Petersburg, where they raised us while she worked as a nurse and hospital administrator for many years. Once retired, she enjoyed driving trips with dad, and later, vacations with friends and family.

Family was very important to mom. Family gatherings to celebrate weddings, graduations, anniversaries, attend funerals, or just a summer vacation were common with her. She was very close with her sisters and brothers; they supported each other though hardships and good times.

Once mom became a grandmother; she became the BEST grandma! She was there at each of their births, made many batches of cookies and bread, knitted many socks, leg warmers, and afghans, attended sporting and school events, college graduations, weddings, and everything in between! Her love of family has very much been passed down to her grandchildren and great-grandchildren.

Mom was short in stature but had a big "I can do it" philosophy, which helped her live a very full life.

Mom was also active in of the Women of the Moose, Emblem Club, Pioneers of Alaska, Order of Eastern Star, Alaska State Hospital Association, and the Association of Western Hospitals. She was a past president of the Emblem Club, was the Grand Igloo trustee of the Pioneers for three years, and a past Worthy Matron of the Order of the Eastern Star.

A family memorial is planned for the summer of 2022 in Petersburg to bring her home.