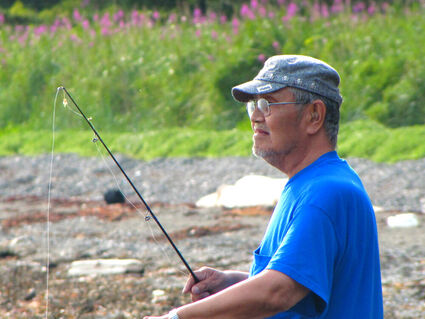 He was raised in Kake until the family moved to Petersburg so that his dad could work at Petersburg Shipyard. He and school mutually parted ways when he was in the 8th grade.

Willie went to work commercial trolling with his dad early on. He made a life of commercial fishing (often as the cook) and working

in the local canneries. He proudly fished with John and Dick Eide for most of his career. If he wasn't commercial fishing, he was sport fishing or talking about sport fishing. He caught his first king salmon on a borrowed rod, right from the beach in front of PFI. After that, he was hooked for life. To his final days, he had the best fishing stories you've heard.

Willie battled severe rheumatoid arthritis which left him in pain for much of his life and battled with COPD and emphysema later in his life. Even with all of that stacked against him, you would never hear Willie complain about anything.

He was an exceptional cook and loved to share meals with family. His bread will be remembered by many. His goal was to have family together and to enjoy the time we have been given. He enjoyed spoiling the babies of the family throughout his entire life. His very last words were words of comfort for the family.

He is survived by his sister Darnell (John) and her children Justin (Sami Jo) and Victoria (Aidan); nephews Ross III and Rudy; niece Rhonda; aunts Nancy Martin and Jacque Martin; and his beloved great-nephew Liam.