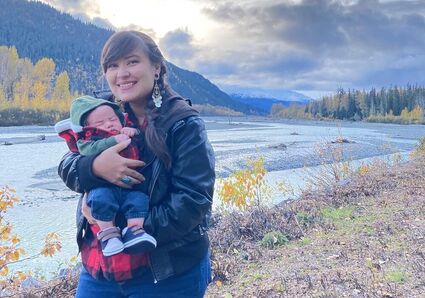 Clara Natonabah wrote and sang a Navajo song featured this month in a Disney music video. She moved to Klukwan just after the pandemic began and lives there with her partner and her son, Lewis.

Haines - Klukwan resident and Diné (Navajo) artist Clara Natonabah wrote and sang a Navajo song that was featured this month in a Disney Junior Shake Your Tale with Chip 'N Dale music video.

The song, titled "Hózhóogoo Dahwiit'áál" (We Will Sing in Beauty), was released on YouTube and appears in the cartoon where the popular Disney cartoon characters dance to Natonabah's song.

Natonabah was chosen by Disney to celebrate Native American Heritage Month in November.

"I was asked to participate for this miniseries for Disney Junior where Chip and Dale are traveling all over the world," Nat...