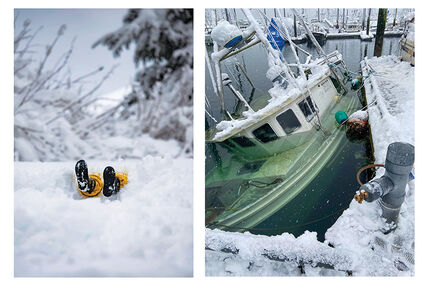 On the left photo: The Kinder Skog kids found a nice giant pile of plowed snow at Eagles Roost Park last Friday. Ryle McGrath attempted a snow angel but ended up swallowed by the five feet of accumulated snow. The right photo: The Kaiulani submerged underwater in South Harbor Saturday before it was refloated on Sunday.

Plows and shovels became commonplace in Petersburg last week after record-breaking snowfall covered the town while Public Works, the Alaska Department of Transportation, businesses, homeowners, and everyone in between cleared roads and paths to keep the snow at bay.

Though the NWS has records in Petersbur...