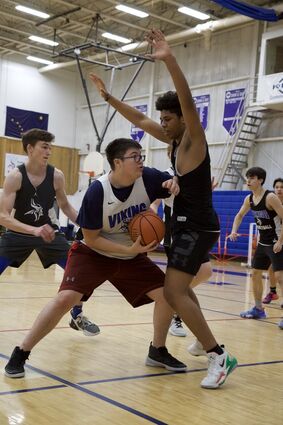 Devon Guthrie holds the ball as Tasene Plummer defends the basket during practice this week.

The Petersburg High School boys basketball team is set to open its season at the Sitka Holland America Tournament this week.

Led by Head Coach Rick Brock, who was named as the 2021 2A Boys Coach of the Year, the boys basketball program is starting its season with approximately 20 students, four of whom are seniors.

The team is still waiting on a handful of students who are coming back from injury or are still with the wrestling team.

After two years of big senior classes, Brock said a lot of the players competing for a spot on the varsity team are new, but they have come a long way in just...