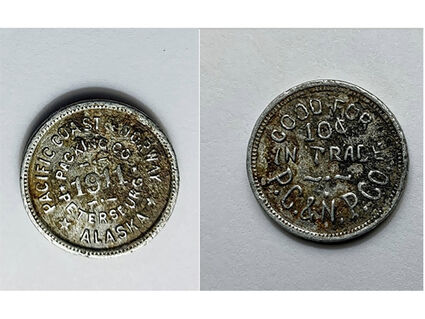 Tokens were used throughout the U.S. cannery industry from the East Coast to the West as part or all of the pay cannery workers received. They could be redeemed at local businesses which had arrangements with the canneries. Steve Rundell found a Pacific Coast & Norway Packing Co. token at Conclusion Island Fox Farm site in Rocky Pass and in 1985 donated it to the Museum. A 1911 token found by Thomas Moore at an unknown location was donated by his widow Ruth. Tokens are known to have been used at 25 different canneries in 23 different Alaskan towns.

Information and photos for this co...