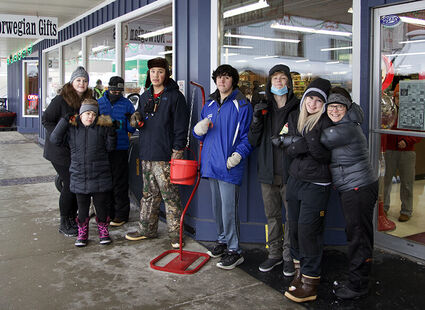 Petersburg High School students stand outside Hammer & Wikan Hardware collecting donations for the Salvation Army. Students participated in a day of service across town where they also handed out food boxes and toys at the Salvation Army, shoveled snow, and baked cookies for Monday meals.

The Salvation Army's signature red kettles raised $13,911.30 for its social services budget during the holiday season according to Major Loni Upshaw.

Upshaw was still surprised with how high the final tally was and said that it was only $90 dollars short of the goal given to the local branch by the Salvation Army's headquarters.

Owners Association, which had volunteers ringing the bells on Christmas Eve, topped the donations list with $7,066.50.