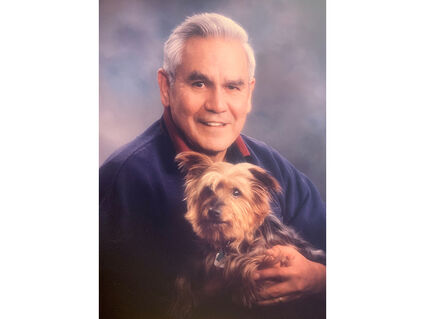 Gilbert Gunderson passed away on Dec. 22, 2021. He was born June 24, 1930, in Wrangell on Shakes Island, as was his sister Nellie Torgramsen, to Margaret Shakes and Gunnar Gunderson.

Their grandparents, Chief George and Mary Shakes, cared for Gilbert and Nellie until Gilbert was 5 years old, at which time Mary passed away. From there they were sent to Juneau, where their dad worked at the AJ Mine. There Gilbert started school, which didn't go well because he couldn't speak English, only Native (Tlingit). He was sent to Haines to a boarding school that catered to Native people for a number of years. He then finished off his school years at Sheldon Jackson in Sitka. There he learned about boat building from Mark Jacobs, while working on the Princeton Hall.

After graduating, he fished for the summer and then joined the Army on Jan. 12, 1949. He fought in Korea and was discharged on April 4, 1952. When returning back to the states, he was admitted to Mt. Edgecumbe Hospital for war injuries and malnutrition. During his stay at the hospital, he met Gladys Roberts who worked in the kitchen which is where Gilbert also worked when he was discharged.

They eventually moved to Wrangell, where Gladys became his wife in November 1955. Between them, they had nine kids: Sharon Scherrer, Joe Huke, Lyle Jones, Rose Anne Hayes, Marcus Gunderson, Arlene Gedney, Arnold Gunderson, Eleanor Knecht and Charmaine Benston. To support the family, Gilbert fished in the summer and worked at the Boat Shop in the winter, along with various other jobs to make ends meet.

About the early 1970s, Gilbert started getting involved in Native politics. He had a heart for his culture and people. He was Tlingit, Yeil (Raven) Kaach.adi (Frog). Gilbert served in many important Native leadership positions such as IRA chairman, ANB president, Tlingit & Haida executive commission, head enumerator for Sealaska in 1971, and he spent much time in Washington, D.C., working on Native land claims. He was an original Sealaska adviser, served in a private-industry appointment by the governor, served on ANB Fisheries Commission, as director and chairman of the Alaska Commercial Fishing and Agriculture Bank, president of the Alaska Fisheries Development Foundation, and also managed Ocean Beauty Seafoods in Petersburg, Juneau and Kake in 1984-1988.

Gilbert had a colorful past and remembered how Native people were treated. He was taught by Native leaders how to better handle those situations. He said he was very proud of our young people. When he received a compliment about how much he had accomplished in life, he stated simply, "I haven't accomplished what I did in my life without the help of good people."

Gilbert married Legia Pate, who had two boys, Frank and Eric, in 1981, but eventually departed but remained dear friends until his passing. Gilbert spent his later years doing the things he loved: Commercial fishing, hunting, visiting many friends, or just spending time at home with his dog Milo.

Services will be planned at a later date this spring ,which was Gilbert's favorite time of year.

The family would like to thank the doctors and nurses at the SEARHC Wrangell Medical Center who took such great care of our dad!