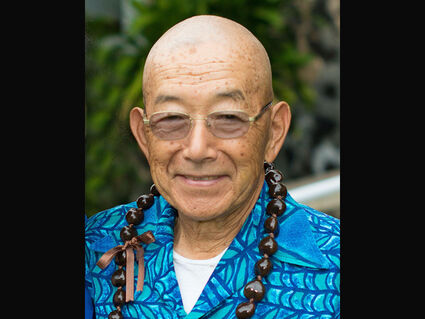 Myles (Mike) Harai was born January 27, 1933, in Kealakekua in the Territory of Hawaii to Minoru and Fusano Harai. The Harai family farmed Kona coffee on the rich slopes above Kealakekua Bay. Mike, along with his three brothers and parents, worked on their farm as a close-knit family. He loved to go fishing in Kealakekua Bay with his family and run barefoot through the coffee fields.

Mike graduated from Konawaena High School in the Territory of Hawaii in 1951. He was the first of his generation to attend university. He met the love of his life, Margaret (Margee) Marie Douglas, in college while attending the University of Iowa in Iowa City. On September 9, 1956 they were married, and one year later Mike graduated in 1957 with a Bachelor of Science in Civil Engineering from the University of Iowa.

Mike was commissioned as an officer in the military in 1958 and had a career as a Construction Engineer and Combat Engineer. He was stationed in Korea, Vietnam, Japan, Germany, California, Missouri, Virginia, Hawaii, and finally in Walla Walla, Washington, building dams on the Snake River. He retired as a Major having earned numerous medals for exceptional and heroic achievement.

Upon Mike’s military retirement he enjoyed spending time with his family. Margee had been his steadfast, devoted and loving wife supporting him throughout his demanding military career. Their children, Rick, Susan, and Cindy, lived all over the world with them on military bases, and while Mike was on his Vietnam tours they lived with Mike’s parents, their grandparents, in Hawaii.

After Mike’s military retirement the family moved to Portland, Oregon and he worked for the Corp of Engineers. Mike was very athletic, regularly swimming and golfing. He enjoyed camping, skiing, hiking, and long car trips with his family. He was involved with the Lutheran Church everywhere he lived, serving as treasurer and deacon.

After retiring from the Corp of Engineers in Washington, DC, he and Margee moved to Petersburg for a few years. Following the passing of their grandson, Tyler Myles Newman, they moved to Palm Springs, California. They enjoyed the sunny weather there for twenty years before returning to Petersburg in 2017.

Mike and Margee enjoyed their grandchildren, taking them repeatedly to Kona, Hawaii, where Mike’s brothers and mother still lived. Always smiling, he had extreme patience and kept up great correspondence with his large family of children and grandchildren.

Mike was generous with gifts, generous with service, and generous with his time. Paul says in 1 Corinthians 13:8 in the Bible that other things will pass away but love will remain; this is Mike’s legacy.