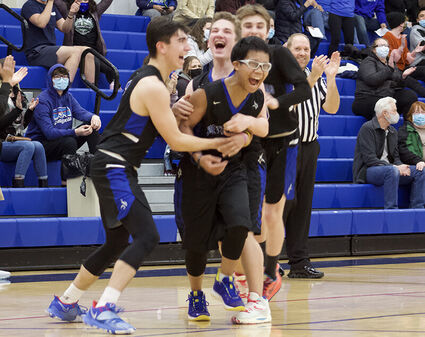 Joseph Tagaban celebrates his fourth-quarter buzzer beater three-pointer which sealed the win for the blue team in the Petersburg vs. Petersburg game Friday.

The Petersburg High School junior varsity basketball team took on the Sitka Wolves on Friday and Saturday in its first home games of the season, giving young players their first taste of high school athletic competition.

Last weekend's action was originally set to see the Petersburg boys and girls varsity teams play against Craig but that was canceled due to high COVID-19 case counts on Prince of Wales Island.

After the cancelation, Activities Director Jaime Cabral invited the junior varsity teams from Sitka and Juneau-Douglas to travel to Petersburg, but Juneau-Douglas was unable to make i...