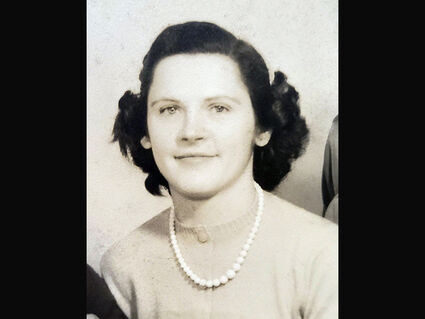 Doris Gregg Smith passed away from Covid on December 25, 2021, Christmas Day, at North Cascades Health & Rehabilitation Center in Bellingham, WA. She was 101 years old, just a month shy of 102.

Doris was born Doris Ruth Gregg in Oak Park, Illinois on January 26, 1920. She graduated from Denison University as a Registered Nurse, then served in the Army in France as a nurse in WWII. She was a Lieutenant. She met her future husband in France, Tarleton (Tee) Smith, also a Lieutenant, from Waco, Texas. After the war, they married, and in 1946 moved to Juneau, Alaska, where Doris worked as a nurse and Tee worked for the U.S. Fish and Wildlife Service (USF&WS). They had three children, all born in Juneau: Victor, Roy and Marilyn.

In 1952 they moved to Petersburg, Alaska where Tee continued with USF&WS and Doris worked as a nurse at what was then Petersburg General Hospital.

Doris started the hospital's X-Ray Department. Someone had left money to the hospital to build an X-Ray Department, but once finished, no one knew how to work it. With permission, Doris sent off for a stack of books and figured it all out. Already an avid photographer (she had developed film with her brother Donald as kids in Oak Park), she was soon developing the x-rays manually in a dark room (it's all done by computer now). Doris was the only x-ray technician for years.

In 1970 Doris and Tee moved to Sitka where Doris worked as a Lab Technician first for Dr. Cloyd and then for Dr. Lunas until she retired.

Doris was an active member and volunteer at the Sitka Lutheran Church, a member of The Eastern Star, and the Pioneers of Alaska. An expert pie maker, she baked countless pies (Alaskan blueberry if possible and always with "from scratch" pie crust) for fundraisers, competitions, and for the Sitka Centennial. She enjoyed her quilting group at the church, led a Tai Chi class, and read one or two books a week into her late nineties.

Doris moved to Friday Harbor, Washington after Tee died to be near family and her son Victor and his wife Phebe.

Doris was preceded in death by her husband Tee in 2012 and her son, Roy Smith of Juneau, in January 2021.