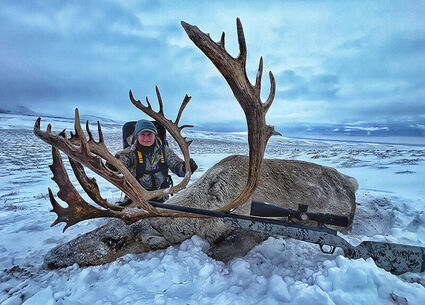 Local hunter Claira Sallenbach couldn't help but think of prehistoric times after she saw her first caribou up close in November. Above, Stallenbach is pictured with the bull, which ended up being one of the biggest ever taken in the state. But for her, it meant providing for friends, family and community.

Claira Sallenbach had talked with friends about making her first hunting trip to caribou country this fall, but when her long-lining season continued into November she thought the opportunity had passed. Then a second chance arose when a friend and her friend's husband, Mark, invited Sallenbach to come for Thanksgiving and try to chase caribou in Cold Bay.

A couple weeks prior, Mark had gotten into a small herd and had taken a nice bull. Okay, that's an understatement, the bull's antlers were big enough to make the Boone & Crockett record book. For a caribou bull to make the book, its antlers must meet a minimum measurement of 400-inches, after a required 60-day drying period.

The Boone & Crockett Club has been promoting conservation and management of wildlife since 1887. The organization, founded by Theodore Roosevelt, focuses much of its efforts on ethical, fair-chase hunting of big-game animals.

Although Mark knew he'd accomplished something special with his bull, he had no idea if any caribou would still be around. Multiple storms had hit the area since his hunt and another was on the way. Once Sallenbach arrived the pair stayed ready by hunting ptarmigan and fox near town.

"Then we just got such bad weather that we were stuck in the house for several days before we were actually able to get out for the caribou hunt," she says.

She extended her stay and the storm finally relented, giving them a small window from 8 a.m. to 2 p.m., when the wind wouldn't be blowing much above 20 miles per hour. The temperature would be in the single digits, but it was now or never. They loaded up the four-wheelers and established a safe time they would turn back.

Things were gnarly from the get-go. Sallenbach was wearing two pairs of warm gloves, yet her hands were still freezing. The exposed skin on her face was quickly turning bright red. And they had to cross multiple streams which covered the entire machine with ice when they would burst out the opposite side.

"It was blistering cold!" Sallenbach says, laughing. "Between that and the freezing tears in my eyes, I was like...this is gonna be a crazy day!"

When the duo came to the area they intended to hunt, a valley two-miles wide, there were six dots on the far hillside. Two of the bodies had big racks atop their heads. The hunters made a plan, ditched their rides and began their stalk. Soon they found themselves just over 500 yards away.

But Sallenbach wasn't cool with the idea of shooting from there. First off, she was borrowing Mark's rifle. Second, she had never shot at anything that far away before, not even a paper target. Even though the rifle was capable of shooting accurately at double the distance-she made the ethical decision-and they took the time to get closer.

Mark and Sallenbach snaked to 350 yards away before the caribou started getting curious. The hunters stopped and got set up. Tucking the rifle into her shoulder made her nervous but, also, strangely comfortable because she knew Mark had it dialed in.

With the scope turned up, she could see the bedded-down bull she wanted to take, but he wouldn't cooperate. He wouldn't stand. So, Mark began waving at the group and that did the trick.

The bull stood up, shook off the snow collected on his coat, and then stared in Sallenbach's direction. He was perfectly broadside and she could see his beard flapping in the wind. She took that majestic moment to get her breathing right.

Sallenbach's instincts took over and she watched the bullet impact the bull's side. Despite the distance and the wind, she made a perfect shot. Adrenaline surged throughout her body and she was instantly moved to tears when her quarry fell to the ground.

Afterward, Mark made sure to get ahead of Sallenbach to video her reaction as she walked up on the big bull. And this is something she is extremely thankful for because she was way too busy being immersed in the moment.

"It was like a dinosaur," she says. "It was big and old. He was years passed his prime and just monstrous."

Facing increasing winds, Mark and Sallenbach made dealing with the meat quickly a priority, so after a few photos they got to work. Mark made sure to have Sallenbach pack out the lion's share, he only took the backstraps and some scraps. He knew it was the right thing to do and she appreciated it.

"I was carrying, like, 150 pounds on that first load," Sallenbach says. "And I was talking to myself, going down the valley like, 'This is the best day of my life!'"

After spending over a decade training to pack out an animal she finally got to dance the dance she desperately desired. It only took her two trips, she did it without pain, and the hardest part was hauling the head and last quarter. By that time, the wind had kicked up to 30 miles per hour and it kept catching the antlers, pushing her downhill.

A sow with three cubs even showed up to make things a little more interesting. But everyone played nice, everything went well, and they safely made the 25-mile trip back to town. The antlers were scheduled to be officially measured last week, but she hasn't heard how that went yet. The bull has an estimated net score of 413, well-above the 400-inch B&C threshold.

When Sallenbach's mother, Brenda Louise, watched the video she was moved by seeing what her daughter did upon reaching her caribou.

"The fact that she would kneel, and offer her blessing, and gratitude for the animal that presented itself to her," Louise says, "is something that really displays how much respect she has for life and the circle of life."

Louise says, her daughter offers prayers of thanks for every animal she's ever taken, and all of the fish, too. Sallenbach was 12 years old when she got her first fishing job, and she's been providing for her family, and others that support her family throughout the year, ever since.

Louise's grandchildren are the sixth generation to call Petersburg home and the family is large, so full freezers are crucial. Sallenbach's skills now brought home some delicious caribou meat for everyone. Louise sure liked it, but what really makes her happy is knowing her daughter has a way with wildlife and people alike.

"She did an amazing job, not only taking care of the animal, but sharing with the people in the Cold Bay where she got it," Louise says. "It generated a lot of generosity, support, kindness and excitement, and I'm terribly proud of everything she did."

For instance, as a "thank you" to her hunting partner, Sallenbach gave Mark the cape from her caribou. The one from his record-book bull, a couple weeks prior, got damaged. The gift means Mark can forgo the possibly-painstaking process of looking for a replacement and go straight to shoulder mounting his memory. For hers, Sallenbach plans to do a European mount.

Sallenbach worked hard for this moment. Multiple past injuries to her knees had caused spinal stenosis in her lower back at age 18. She had to learn how to walk again at 19. That meant taking time off college, then going back to study exercise physiology, so she could, literally, teach herself how to physically fix herself.

"The only thing I wanted to do was commercial fish and hunt," Sallenbach says. "And I couldn't do those things."

She devoted six or seven years to going after what she wanted. Developing, her own, 4 to 8-week training programs to get her afield and keep her hunting. And when the hunting season ended, it was time to prep for the next fishing season. That's when she'd develop similar programs to maintain progress and help her through Dungeness and seining.

Sallenbach gets two or three months off from fishing a year, and comes home to Petersburg for a couple weeks at a time, here and there. When she isn't working hard on a boat, she's hunting. She says her being craves it, but she wasn't raised in a hunting family.

She learned a great deal by meeting and tagging along with people like Mark. But mostly she's self-taught, through a very slow learning process, filled with a lot of errors. Sallenbach laughs about all the hours she spent just hiking around the trees with a gun, because that's all she knew how to do. She didn't always come home empty-handed though, she says. She's put a lot of deer meat in her family's freezers but had shot nothing bigger than deer prior to this record-book caribou.

Louise says, she's proud of her daughter's accomplishment and proud of her generosity. Sallenbach shared meat with Cold Bay community members who helped her in any way.

Louise says, some bones were cut for soups and others were destined to be fashioned into tools. Very little of the animal went to waste and that's the way it should be. Because when a community comes together to celebrate and share this way it forms a special bond worthy of being passed down from generation to generation.