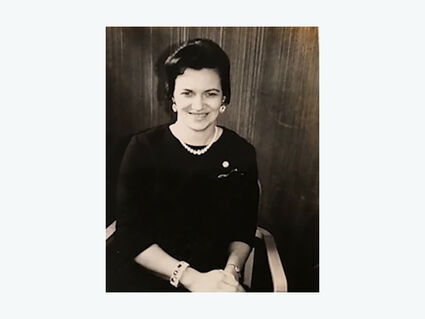 Former Petersburg resident Gertrude Irene Reeser passed away peacefully at home in Yuma, Arizona on September 30, 2021. She was born August 7, 1928 to George and Evangeline Emmert in Molalla, Oregon. Gertrude grew up mostly in Sweet Home, Oregon, attending school there and in Heston, Kansas.

She married Maynard Reeser of Albany, Oregon in 1946. In 1953 she boarded the steamship Baranof in Seattle with their two young daughters, sailing north to join Maynard in Petersburg. Gertrude bought the old Dora Mae's Dress Shop, which she modernized and renamed Le Conte Apparel. She sold the store after her youngest daughter graduated from Petersburg High then went to work as an accountant for Kayler Dahl and later Ocean Beauty Seafoods.

Gertrude was active in the Women of the Moose and the Business & Professional Women's Club, eventually serving as State of Alaska BPW president. Appointed by Governor Egan as chairwoman to a newly-created Commission on the Status of Women, she made several trips to Washington, DC to get it up and running.

Always an advocate for women, she worked diligently to improve lives and uplift many, especially Alaska Native women, both locally and in remote northern villages. She felt truly honored to be adopted into the Tlingit tribe by Mary Reyes and, thereafter, always treated as family.

Over the years in Alaska, Gertrude particularly loved salmon fishing; her favorite spot was at the mouth of Blind Slough. She enjoyed canning and pickling salmon and making kelp pickles. An excellent seamstress, she sewed many cheerleading and drill team uniforms for her daughters and their friends.

She and Maynard moved to Seattle in 1975, where she continued to work in the seafood industry until 1999 when she retired and moved to Yuma, Arizona. There, she enjoyed volunteering at the humane society, Stone Ridge Church, Crossroads Mission, and having time for her hobbies.

In her 70's, Gertrude was featured in the Yuma Sun newspaper when she learned to weld at the local college, using her newly-acquired skills to make art. She was also a talented and prolific potter; the area around her pool filled with many of her artistic creations.

Gertie, as her friends called her, loved hosting family, friends and neighbors at her home. She was an admired hostess and a great cook who continued to prepare and serve wonderful meals and celebrations well into her 92nd year of life.

She enjoyed traveling with close friends and with her daughters, taking many cruises and trips to Hawaii, Mexico, and overseas as well as month-long road trips. Her "special place" was on the island of Maui.

Gertrude enjoyed robust health up until five months before her passing when she fell and broke her hip. At 92, she had just returned from a month-long trip with one of her best friends. Over the summer, working toward recovery, she deeply appreciated and spoke often of the love, care, calls and cards she received from family and friends.

Gertrude left a legacy of giving, having spent much of her time making and doing for others: from the 100+ handmade rag dolls (each with its own unique dress) made for the children of Haiti, to sewing 52 school uniforms for children in an orphanage in Mexico, to the many pieced quilts she made and gave away to residents of Crossroads Mission, retirement homes, and animal shelters in Yuma.

She was a follower of Christ and a true helper to those less fortunate than she, often saying she felt the Lord gave her a long life so she could help more people. No one who came to Gertie for support or in need was turned away, whether it be a friend, stranger, or animal.

A life-long dog lover, over the years she adopted several from the animal shelter, usually choosing the oldest, least attractive one because she felt it needed a good home the very most. Those were some lucky dogs!