Lady Vikings win one and lose one in Wrangell 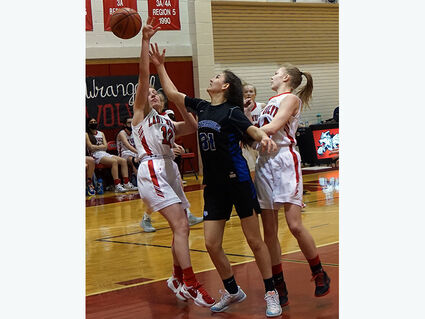 Surrounded by Wrangell players, Adrianna Stough fights for possession of the ball.

The Petersburg High School girls basketball team traveled south to Wrangell last weekend to take on the Lady Wolves in their homecoming games, winning on Friday and losing on Saturday in non-conference play.

Petersburg Head Coach Dino Brock said his team stepped up defensively and were able to battle the "big and athletic" Wrangell team across both games.

"I thought that we played at the pace that we wanted to both nights which really helped us on both ends of the court," Brock said.

"Friday we shot the basketball a

little bit better which is kind of the swing and the difference in the two...