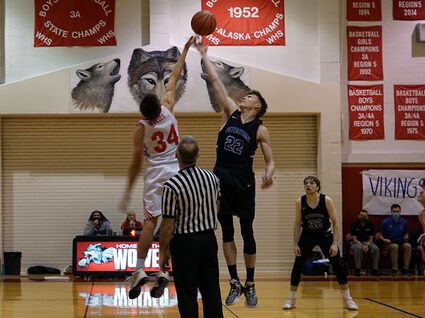 Michael Durkin leaps up, stretching for the ball during the tip-off.

After a short boat ride over to Wrangell last weekend, the Vikings took to the court twice against the Wolves for Wrangell High School's homecoming, losing on both Friday and Saturday.

The Vikings were missing a few key players, said Head Coach Rick, and his team struggled to score against Wrangell's tough half-court defense.

"I think it was two times we went probably over five minutes without scoring and when you have those long lapses in your offense it's difficult to be successful and that's really what happened," Brock said.

The Wolves set the tone of the weekend on Friday night, beatin...