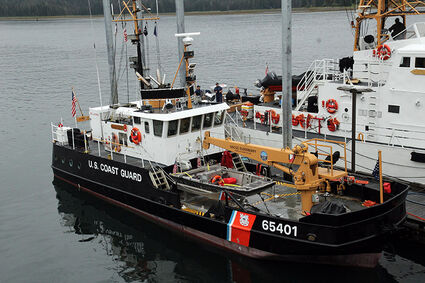 The United States Coast Guard Cutter ELDERBERRY is tied up outside the USCG building on Dock St., next to the USCGC ANACAPA.

During the February 21 Petersburg Borough Assembly meeting, Assembly Member Dave Kensinger gave a report on his attendance at the 2022 Southeast Conference Mid-Session Summit which included an update on the U.S. Coast Guard's interest in Petersburg, federal funding in Alaska, and other important matters to the assembly.

The future of the Coast Guard's presence in Petersburg has been in question since it was announced that only three of the four coastal buoy tenders, the class of ships that the USCGC Elderberry is part of, would be replaced.

Kensinger said that while in Juneau he had a "very...