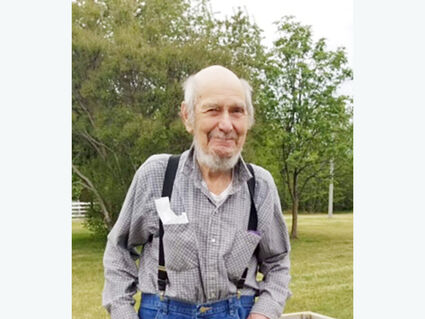 Bud passed away February 26, 2022 in Palmer, Alaska. He was born May 27, 1924 in Elmwood, Illinois to Claude Sr. and Elizabeth File. The family moved west to Renton, Washington in 1938. In 1941 the family moved north to Petersburg, Alaska. Later in 1944 Bud joined the Army, completing boot camp at Ft. Richardson, Alaska, and was later stationed at Adak, Alaska. Bud was honorably discharged in 1946 as a Sergeant.

Bud returned to Petersburg after his military service and worked in timber, fisheries, and construction. He married Esther Toresen in 1953 and together they raised four children: Brian, Claudia, Julie and Rory.

Bud was an active cross-country skier throughout his life, having skied competitively in his 20's. He was a lifelong gardener and an avid woodsman.

Bud is preceded in death by his wife Esther, his parents, 3 sisters, and 8 brothers. He is survived by his four children and his sister Amy.

Funeral services will be held on Wednesday, March 2, 2022 at 1:00 pm at Janssen's Mat-Su Funeral Chapel in Wasilla. Burial will be at Petersburg Memorial Cemetery.

To send flowers to the family or plant a tree in memory of Claude "Bud" Edward File, Jr. please visit https://www.janssenfuneralhomes.com